The Adventures of Great Grandmother Beady Dine is an experimental spy-fiction audio drama and album that incorporates a story told by actors with sound effects featuring instrumental surf/garage tracks transitioning each scene. The whole idea started when aspiring filmmaker Paul Chesney ran out of funding to purchase film for a full-length 16mm feature. Being a relatively new fan of radio dramas like the whistler & Twilight Zone, Paul decided to make a movie without film; and plans for an audio project were born.

This exciting new album is now being recorded at Chesney Digital Studio. Here you will find pre-release track previews updated on a regular basis so check back often to listen to the latest installment of the Beady Dine story. 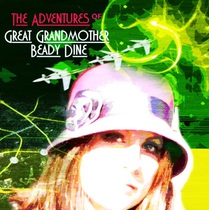 I'm super excited to announce that the Beady Dine 4-track EP is now available on Amazon and iTunes! Or go to CDBABY and get the vinyl 45!

All versions of the release contain the first four tracks including: Introduction, The Beady Dine Theme Song, Laser Diode Scone and Morning Commute.

Hello! It's been a few years since the last update, but Beady Dine is back on track! I'm proud to be currently working on condensing the script into one album; that is, a fancy 2-disc set with plans for illustrations.

Check back for updates, I'll be posting at least once a week.

The Journal of Beady Dine - The Story

These are the accounts of research scientist and author Beady Dine who narrates each of her journal entries taking YOU the listener into a dark world of intrigue....﻿﻿

Beady arrives to work one avaerage Monday at the technological research firm the Omega Institute, and notices several instances of strange behavior from her fellow collegues. Shortly thereafter, it becomes apparent that the change in moral is directly related to the actions of new owner & CEO, Professor B.T. Wilkins. Wilkins, who's been appointed to head up a new branch of government called the Bureau of Business Licensing and Regulation, not only has the power to purchase shares of businesses struggling to keep from Bankruptcy, but also to enforce and impose an oppressive "carbon output tax".

When Beady refuses to hand over "Project 9" to Wilkins in order to qualify for membership in his 'secret scorpion society' and keep her job, Wilkins steals the project anyway and fires her for not cooperating.

Later while at her favorite coffee shop to think things over, Beady is accosted by two agents with questions about her recent private sector job loss. After establishing that she now has no way of paying her daily carbon output tax, the agents escort her to a facility where she is to report on a regular basis to a carbon counselor.

Instead of a government bureaucrat though, Beady is pleasantly surprised to see her friend and former co-worker Spiff Johnson, working undercover for an internal affairs agency investigating Wilkins for fraud.

Part of this investigation, is the recouping of a downed space craft which mysteriously disappeared after recovering environmental data proving solar activity alone to be naturally responsible for climate fluctuations, and not Co2; thereby exposing Wilkins & his profitable Carbon output hoax.

Spiff, in need of Beady's expertise, asks her to go with him and a team of others on an expedition to the crash site in order to analyze the data from the craft's data pod﻿. What happens next is a shocking nightmare of horror as the team arrives to find themselves face to face with Wilkins and an army of terrifying unstoppable robots!

Listen to the saga unfold in stunning realism with action-packed sound effects and heart-racing music set to the extremely rare genre of surf-punk-psychobilly-space-garage-rock.